The terrible earthquake that hang Amatrice and its neighborhood few days ago, disrupted a city and created about 300 dead. It’s a clear rupture inside the life and the soul of the entire Italy. It’s the unpotentiality of the man in front of the nature. And not only, it’s a question about the architectural measures taken or not.

In the context of Biennale Urbana and its revivification of abandoned places/ territoires de passage, the opposite aspects of life-oblivion, shelter-abandon, security-danger, culture-nature are investigated also through the length of the artist Cristopher Cichocki. Invited by Elena Giulia Abbiatici, Cristopher Cichocki is a multi disciplinary artist, working in a time-based and site-specific way, and the founder-director of Epicenter Projects alongside the San Andreas Fault Line in California. An international selection of contemporary artists have been invited to produce site-specific works alongside the San Andreas Fault Line, one of the largest fault zones in the world that spans throughout California’s desert and coastline regions.

Is the rupture between the power of nature and the labour of man and his decision so unbridgeable?

Is the rupture between the productive world and the cultural one due to our contemporary social or is it a necessary condition to the function of the societies?

Cristopher tries to answer to this question with an environmental installation titled: Fluid Division, located at the entrance of Marinoni theatre.
This one is placed in a transitional

space through the sea and the theatre, trying to cover the space of separation constituted by beach, with sand and surrounded vegetation.

Two theatre’s tubes become the binaries of a new river crossed by liquid fluorescent painting and the ground where are triggered dry branches inhabited by little snails, typical of this Lido’s area.

The sand is the base of the three elements, crossing and re-combining them; not differently from how it disseminates itself into everyday surfaces.

An orange neon line marks the borders of the installation, like a frame of a new possible futuristic eco-environment, able to connect recycling, sustainability and imagination. The artist does not add anything, instead he reassigns a proper space-time. His painterly gestures are able to point out a line and color un listened shrubbery and Lido’s sea water. 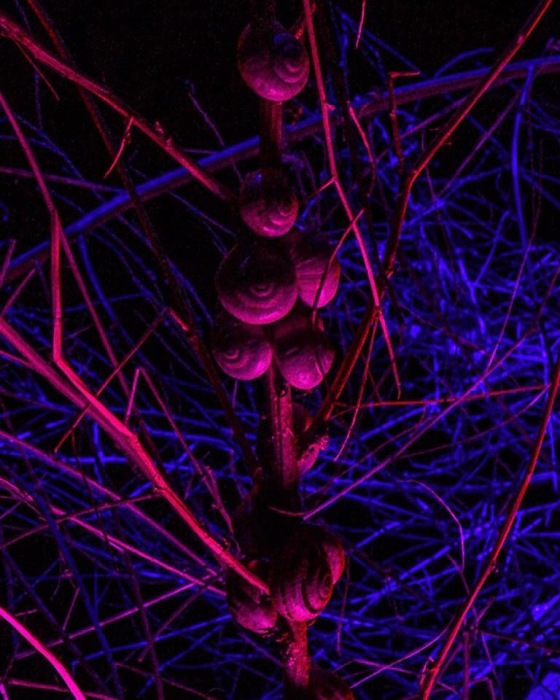